Questions Answered: How do I write “If either that or that condition is met?” Or “If both conditions are met?” Can I write Scala classes independently already?

What Will I Do? Program, mostly. There’s a bit of reading at the beginning.

Rough Estimate of Workload:? Two hours? And quite a bit more if you do all the optional assignments, too. 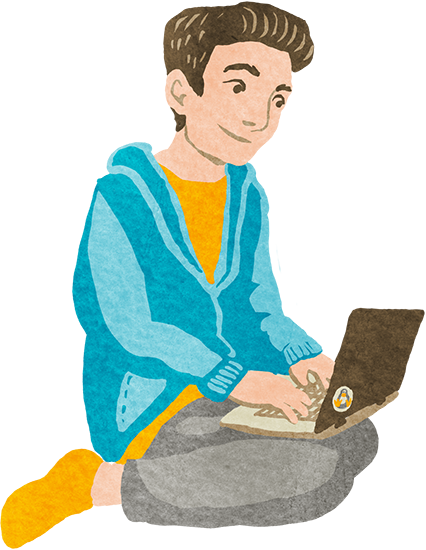 In Chapter 3.2, you wrote isLost, a method that defines a Game of FlappyBug to be over if the obstacle touches the bug.

Here’s one way to do it:

That works. But it’s a very complicated way of expressing something rather simple. We’d much rather write: “If that condition or that other condition is met.” Perhaps you’ve already yearned after such an expression in the earlier chapters.

In this chapter, you’ll learn to combine Boolean values with logical operators such as “and” and “or”. We’ll get back to FlappyBug after a general introduction to these operators.

The Scala language supplies us with several logical operators (logiikkaoperaattori).

The operators && and || are evaluated non-strictly (väljästi). What this means for these operators is essentially that the left-hand operand is evaluated first and if it alone determines the value of the logical operation, the right-hand operand isn’t evaluated at all. (We will take a broader look at non-strict evaluation in Chapter 7.1.)

This non-strictness has practical significance, as illustrated below.

First, let’s define a couple of variables. Here, we use literals, but you can easily imagine the numbers being read from the user’s keyboard, for instance.

Let’s divide one number with the other and see what we get. As we do so, let’s play things safe and ensure that divisor doesn’t equal zero. We can use either && or || to do that:

Assuming the divisor is not zero, we can swap the operands and still get the same result:

But what if the divisor is zero?

The computer performs the division as it evaluates the first operand. We get a runtime error. We never even reached the expression divisor == 0.

On the other hand, if we check the divisor in the first operand, things work out fine:

Since divisor equalled zero, the expression divisor == 0 evaluated to true. It becomes unnecessary to evaluate the rest of the logical expression given that true || anythingAtAll is always true. Because of the non-strictness of these operators, the computer doesn’t even evaluate the second operand. Execution order matters!

You can use rounds brackets to group logical expressions just like arithmetic and other expressions.

Study the following piece of code. Carefully consider what happens as it runs. You might wish to make notes on a piece of paper.

Further improvements to the vending machine

Logical operators are a convenient replacement for multiple ifs.

Recall the sellBottle method from Chapter 3.4. Here is the original Int-returning version:

Here are two attempts to reimplement the method with logical operators:

Make FlappyBug harder as suggested at the top of the chapter. Do it as follows.

The project Miscellaneous contains the package o1.blood, which in turn contains the class BloodType. Implement that class so that it matches the documentation that comes with the project.

The Scaladocs in project AuctionHouse1 describe several classes for representing items that have been put up for sale in an imaginary online auction house. In this assignment, we’ll focus on a single way to sell an item: simply giving it a fixed price. Later assignments will features auctions and changing prices.

Fetch the project AuctionHouse1 and view its Scaladocs. Implement class FixedPriceSale of package o1.auctionhouse so that its behavior matches the documentation.

The rest of the chapter consists of practice tasks that are voluntary but highly recommended. Take them as an opportunity to build up fluency. If the weekly deadline is ominously close, you might wish to go to Chapter 4.5 before returning here. The assignments below will probably take several hours to complete.

This problem will let you apply the logical operators more extensively and freely than the preceding ones. It also provides practice on a number of other concepts.

Imagine we have an application (or several) that needs to represent time intervals: an interval begins at a particular moment of time and continues until another moment. We intend to model these concepts as the classes Moment and Interval. Each Interval object is associated with two Moment objects that represent the interval’s first and last moment.

The given code for Moment is explained below.

As we create a Moment instance, we specify the moment in time that it stands for. Our implementation doesn’t commit to any particular unit of time (days, years, nanoseconds, etc.); any integer will do.
A Moment delegates its whole toString method to the integer it stores. Notice that you can call a method on an Int! An Int’s toString method returns the characters that correspond to the number; e.g., for the integer 123 we get the string "123". (We will discuss the methods on Ints further in the next chapter, 4.5.)
There’s a distance method for determining how far apart two moments are.
isLaterThan, later, and earlier compare moments in different ways.

General hint: make use of abstractions

One of this problem’s main themes is to learn to make use of the other methods in the classes that you write. Sure, you’ve already done that in ealier assignments, too, but this one particularly highlights the matter.

If you write the required methods completely independently of each other, you’ll find yourself duplicating code. Don’t do that. Consider what other methods you’ve created that you could call. Try to keep your code DRY. Non-redundant code is easier to modify and less vulnerable to bugs.

In fancier words: Every method is an abstraction (Chapter 1.6). You should build new abstractions atop existing ones. For example, the method isLaterThan is as an abstraction of its concrete implementation, which takes the values of two instance variables and uses an operator to compare the two: this.time > another.time. The other methods that need to compare two Moments can simply use this method and don’t need to deal with the variables directly.

A task in four phases

Implement Interval and Moment so that they meet the specification. Below is a recommended workflow that you can either follow or ignore.

Phase 1 of 4: Getting started with Interval

When are two Moments equal?

If you use == or != to compare moments , what you get is an identity comparison (“Do these two references point to the same Moment object?”; see Chapter 3.2.) What you don’t get is a comparison of the Moment objects’ actual contents. These operators won’t tell you whether two distinct Moment objects represent the same moment in time, that is, whether their time variables have identical values.

In this assignment, identity comparison and those two operators are completely unnecessary. You don’t stand to gain anything from using them. Other methods will serve you better!

Phase 2 of 4: isLaterThan and overloading

Phase 4 of 4: combining instances to produce new ones

The methods union and intersection are still missing from class Interval. Implement them and you’re done.

How private is private?

Student question: How can that Moment class work? time is private!

Let’s take a moment to consider why the given code from the previous assignment doesn’t produce an error message.

private indicates that a program component is for internal use within the same class. The private component isn’t accessible by only a single object but also by the class’s other instances.

In the words of the late Nobelist:

All human beings have three lives:
public, private, and secret.

In Scala, “secret” is written private[this]. Place that modifier in front of a variable definition, and the variable will be accessible by only an individual object. In O1, we won’t be using such “secret” variables.

Go back to AuctionHouse1. Implement class DutchAuction as specified.

Are you a bit upset that you had to write the same methods again in class DutchAuction or at least copy them from one file to the other? Outstanding! That means that you’re motivated to reach Chapters 7.2 and 7.3 where you’ll learn about avoiding such code duplication.

Stay with AuctionHouse1 and implement EnglishAuction.